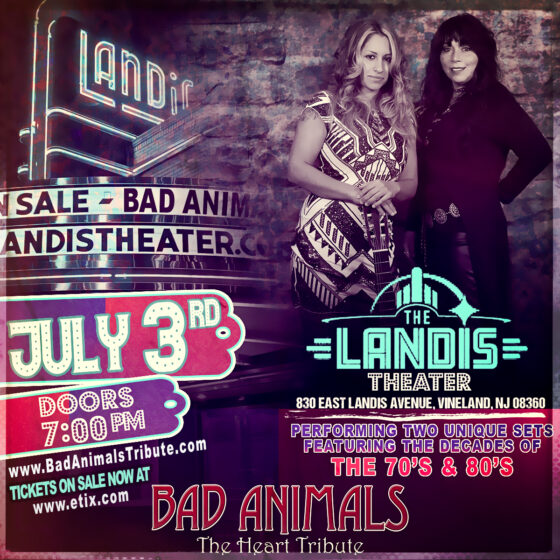 Bad Animals – at The Landis Theater!

July 3, 2021 8:00 PM
Doors Open: 7:00 PM
TICKET PRICES CURRENTLY AVAILABLE
ADULT: $30.00TICKET SALE DATES
ADULT Public On sale: March 10, 2021 12:36 PM to July 3, 2021 9:30 PM
Founded in 2001, this artistic tribute to Heart is performed by Bad Animals, who are the next best thing to the real thing!
For over four decades, Ann and Nancy Wilson of Heart, who were inducted into the Hall of Fame in 2013, have created some of the most diverse music in rock and roll.Bad Animals, an international tribute act based in New York, recreates this incredibleauthentic Heart experience. This talented group, having received rave reviews, shared their story with the Wilson sisters. Ann told lead vocalist Daena D, “Have fun with it!” Following Ann’s advice, they are having a whole lotta fun playing Heart’s most memorable tunes.Since Heart has such a large catalog of well-known songs, Bad Animals decided to highlight Heart’s biggest hits into a few different show specialties. Their live production shows include a powerful headlining core performance, an 80’s and a 70’s review featuring specific hits from each decade with inspired (by Ann and Nancy) period clothing.Don’t miss your chance to see Bad Animals LIVE at The Landis on Saturday July 3rd!